Denmark is the most interesting country for holiday cycling in Europe. Our kingdom have more than 7,000 kilometers of coast line, sand dunes, forests and open landscape and Copenhagen is famously known as the cycle capital of the world.

We can organize your trip as an individual trip and find bicycles to rent – if you need it.

Just tell us when, how many persons, how long time, where in Denmark you prefere to go, which accommodation you prefere etc and we will make you an offer.

Read more about The National Cycle Routes in Denmark beneath.

Here is an example of a trip we offer in the area of Copenhagen and North SealandUnd auf Deutsch: Die Nord Seeland Schloss Tour

Here is some general information about cycling holidays in Denmark: Cycling in Denmark with Danish Cycle Safari 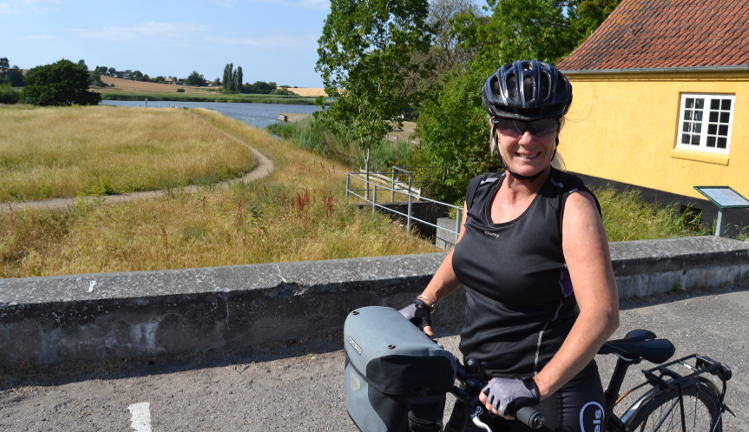 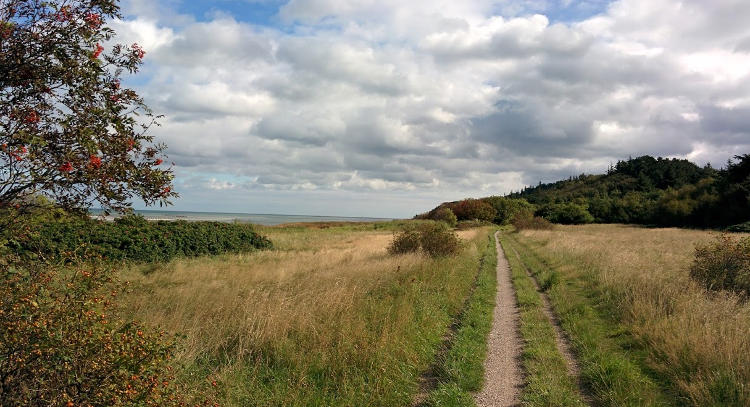 Path in nature near the coast in Denmark.

The National Cycle Routes in Denmark

The West Coast Route – 560 km (312 miles) – 70% asphalt
The west coast route from Rudbøl to Skagen offers pounding surf, extensive sandy beaches, wind in your hair and the salty tang of sea weed . The change in the coastal landscape from tidal flats to dunes and soft sandy beaches is quite an experience! It’s best biked from the south with the south-west wind at your back. Wide tyres are best for the gravelled stretches. More information: www.northsea-cycle.com

Hanstholm- Copenhagen – 420 km (218.7 miles) – 80 % asphalt
This route takes you from the modern port of Hanstholm on the stormy North Sea through plough land and forests and along beaches to the ancient port of Copenhagen lying sheltered on the Øresund strait. Mostly asphalt surfaces except for Jægerspris where you cycle on gravel paths past oaks which are thousands of years old. However the ferry on Sealand from Sølage to Kulhuse has been layed down, so You follow the fjord around.

Hærvejen (The Historic Military Route) – 450 km (281 miles) – 78% asphalt
The historical cycling route between Viborg and Padborg has been extended all the way up to Skagen. Throughout the ages people have travelled along the top of the ridge of Jutland to avoid having to cross the large streams. With the bicycle as a time machine, you can take the whole family back in time to ancient burial mounds and medieval churches. You can continue along the route across the German border as far as the Eider.

Søndervig- Copenhagen – 310 km (190 miles) – 90% asphalt
From the flattest part of western Jutland this route takes you over the highest “peaks” in the country, the hill and lake district of central Jutland (a subglacial stream trench). You really get to experience how the landscape changes at the ridge of Jutland where the glacial deposits of the ice age came to rest. The route runs mainly along local roads and includes the old royal road from Kalundborg to Copenhagen.

The East Coast Route – 650 km (400 miles) – 90 % asphalt
Like a finely embroidered border from Skagen to Sønderborg the route winds its way along the jutting promontories, necks, heads, headlands, etc. of the landscape. The east coast is so winding that this is the longest of the national cycling routes. At the bottom of the inlets you can visit the old market towns along the way.

Esbjerg- Copenhagen – 330 km (205 miles) – 92% asphalt
The route runs from Esbjerg, the port of entry from England, past the Odense river and terminates at the lake in Tivoli Gardens in Copenhagen. On the way, you experience Danish farmland with black-and -white cattle in Jutland and waving corn fields on the islands of Funen and Sealand.

Sjællands Odde – (Spit of Sealand) – Rødbyhavn – 230 km (143.7 miles) – 90% asphalt
Route 7 combined wih the east coast route makes it possible to cycle from the northernmost town of Skagen to Rødbyhavn without looking once at a map! Follow the safe paths, Isefjord path and Jyderup path, from Odden (the Spit) across western Sealand. The road surface may occasionally try your patience but the route is well suited to families.

The South Sea Route (Rudbøl-Møn) – 360 km (225 miles) – 95% asphalt
This route starts at the tidal flats in the west and ends at the high chalk cliff of Møn. You first experience the southern borderland and afterwards the sparkling south sea islands of Als, Funen, Tåsinge, Langeland, Lolland, Falster and Møn. This tour offers great variety as it alternates between land and sea, and also provides refreshing breaks while you cross by ferry from island to island.

Helsingør (Elsinore) – Gedser – 250 km (157 miles) – 92% asphalt
This route, which runs from Elsinore to Gedser, is an international link between the Scandinavian countries and Europe (“as the crow flies”). But as you cycle through Sealand and Falster the landscape, with its winding roads, plough land, manors and large fields, is typically Danish . Read more: www.bike-berlin-copenhagen.com

Tour of Bornholm – 105 km (65 miles) – 90% asphalt
Bornholm, the island of cliffs and sunshine, is so different from the rest of Denmark that a visit can even compete with trips to exotic far off places. The tour around the island follows the numerous excellent bicycle tracks built on paths formerly used for rescuing ships at sea, disused railway tracks, woodland lanes and local roads.

Limfjordsroute – 610 km (381 miles) – 90 % asphalt
From the North Sea to Kattegat or visa versa if more convenient with the wind. This new national cycle route follows the costal fjord and passes villages, fishing harbours etc. It goes through the counties of North Jutland (235 km), Viborg (295 km) and Ringkøbing (80 km). You will see a variation in the landscape from dunes and beaches to meadows and wet areas with many birds, example Vejlerne which is one of the most important bird-areas of Scandinavia. More information: Limfjordsruten 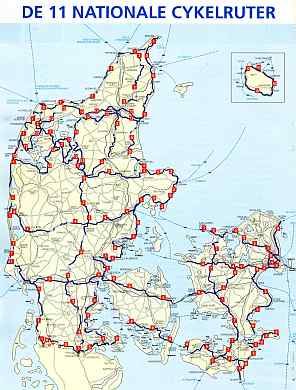 The Danish National Cycle Routes can be found on the website: Trafikkort.vejdirektoratet.dk (go to the menu at the left, choose the picture of a bicykle). Here you will find the detailed itineraries and you can download gpx-files for your own navigation device.